A History of St. Paul’s

The Growth of Our Worship Community

Since 1853 St. Paul’s has welcomed worshipers with the good news of God’s grace for us in Jesus. We are a church in which the past, presence and promise of God’s love and grace are celebrated and proclaimed. Today we are a gathering of God’s forgiven people with over 650 members committed to bringing the life-giving message of God’s love and light to our community, our nation and our world.

In 1851, the Rev. Dr. John Gottlieb Morris, his brother Charles S. Morris and Dr. Benjamin Kurtz, believing in the importance of higher education for women bought a tract of land from what was once the Northhampton estate of Mr. Charles Ridgely to build a college. They also laid out a town to be built on the same tract of land and called it Lutherville in honor of Martin Luther. Some of the streets of Lutherville are named for leaders of the Protestant Reformation, including Melancthon Avenue, named for Philip Melancthon, Luther’s right hand man and the author of the Augsburg Confession.

The college was soon established and incorporated as the Lutherville Female Seminary. This was the first such school for women south of the Mason/Dixon line. After 100 years of service in 1952, the college finally closed its doors and reopened as the College Manor Nursing Home.

In short time, recognizing the need for a church to serve the school and the community, the founders donated the site on which the church building now stands. In 1853, with the Rev. Charles Martin as its pastor, a congregation was born. 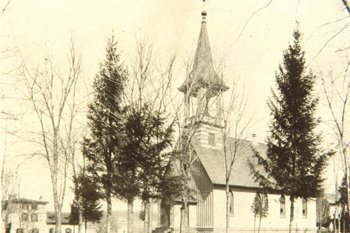 During the first three years of St. Paul’s existence, there were no buildings on the site in which to worship. On July 19, 1856 the cornerstone of the first church was laid and the new church building was dedicated the following year. For the first 16 years of St. Paul’s existence it was a non-denominational church and was frequently served by non-Lutheran pastors. During many of these early years, the president of the college was also the pastor of the church. One of these men, the Rev. William Heilig, built the famous Octagon House of Lutherville.

During the pastorate of the Rev. Richard Ehrhart, two especially significant events occurred. Early in 1949 the congregation voted to build the first story of a separate Parish Hall. In addition, in 1952, St. Paul’s began its Christian kindergarten. The weekday school has grown and continues today with programs for 2-year-olds through pre-K. Led by our Weekday School Director and gifted teachers, the school is a mission of our congregation through which we seek to provide an excellent pre-school education within a Christian setting.

During the pastorate of the Rev. Donald Sanner, St. Paul’s congregation and the surrounding community grew considerably. In 1956, the second story addition to Parish Hall was begun and completed. In 1961, land adjoining the church property was purchased for a parking lot and additional educational space. In late 1969, the building now known as Spangler Hall was completed and dedicated.

The Rev. John C. Naegele was called as pastor in December 1970, beginning a 21-year-ministry at St. Paul’s. Under Pastor Naegele, a number of significant events and ministries took place. In 1974, a major renovation, designed by church member Richard Foose, of the church building was undertaken, which included incorporating the overflow room into the main part of the church.

In November, 1992, the Rev. Mark A. G. Huffman was called as pastor and served St. Paul’s through November 2013. During his 22 year tenure, the stained glass windows were added in 1994 and the renovated area is now fully integrated into the worship space. The church also underwent a significant building project in 2007 to renovate the Parish Hall building for our Preschool ministry, which also added a connecting breezeway to the Sanctuary Building and provided accessible restrooms.

In June, 2015, the Rev. Dr. Edward N. Kay was called to serve as the pastor of St. Paul’s, after 5 years of serving as an Assistant to the Bishop in the Delaware-Maryland Synod, ELCA.

1853 The Lutherville Female Seminary was established. A building to house the seminary was built on part of the Northhampton estate of Mr Charles Ridgely of the Hampton House. A congregation for the Seminary and for the community of Lutherville was set up in Oct.

1854 The Seminary opened in its building October 2

1856 The cornerstone was laid for a church building for the congregation on July 19. Rev. Charles Martin became the first pastor.

1857 The church building was dedicated. The building was used by the Union Christian Association Church, with Lutherans, Methodists and Episcopalians worshiping there.

1867 The house at 300 Morris Avenue was built. This house actually fronted on Webster Avenue. Webster Ave. may have existed only on paper, but it does show up on maps as late as 1915.

1869 The church severed its affiliation with the seminary and was incorporated as St.Paul’s Evangelical Lutheran Church on Oct.20. St. John’s Methodist was built with the Methodists attending there. The Episcopalians continued to hold services at St. Paul’s until 1888 when the Episcopal Chapel of the Holy Comforter war built.

1899 The new church building was completed. The dedication took place on May 21. The back room of the church was used for the Sunday School.

1917 Rev Dr. Bloomhardt left on Dec. 23 to become a chaplain serving in World War I. During the years 1917-1922 Dr. Joseph B Wolf, Rev. Dr. Edward Morgan and Rev. Robert S. Miller served as supply pastors. Even secretaries of the Church Boards served in the pulpit.

1922 The difficulty in finding pastors who would serve at St. Paul’s was solved by building a parsonage at 201 Morris Avenue. The property for the parsonage was given to the church by Bertha W. Wack as a memorial to her husband Henry E. Wack. Rev Dr. J. William McCauley became pastor on May 1.

1931 A 75th Anniversary celebration was held for the first church building on Oct. 4.

1943 A 90th Anniversary celebration was held for the congregation Sept. 26 through Oct. 3.

1944 Plans for a Parish Hall building were revived.

1948 On Jan. 25, Rev Spangler came to ring the church bell. He discovered a small fire in the church sanctuary which was put out by the Lutherville Volunteer Fire Company with which he was a member and for a while its President. Rev. Spangler left in the spring. Rev Richard Ehrhart I became pastor in August.

1949 The church council voted to build just the first floor of the Parish Hall. The second floor would be built later. Groundbreaking occurred on July 24 and the cornerstone was laid on Oct. 2. Vacation Bible School began. A 50th Anniversary celebration was held for the current church building in October.

1952 The Christian Preschool and Kindergarten began.

1956 A petition was filed to close Webster Ave. in Nov. This was a street most likely on paper only. One landowner objected and so the street was not “closed.”

1957 The Parish Hall was enlarged by adding to the first floor and adding the second floor. Groundbreaking occurred on March 31 followed by the dedication on Nov.17.

1964 Grace Lutheran Church proposed moving into the area. This was opposed by St Paul’s. The church was built with groundbreaking occurring on April 4, 1965. John V. “Jack” Trautwein was installed Assistant Pastor June 21.

1965 The parking lot was repaved in May and was lined off for 53 cars. A new modern church building was proposed and rejected. To build on Webster Ave. full title to the entire street was necessary. The church already owned half of the street. Notices were sent to the landowners without much success. Landowners who lived in the area were visited but still refused to give up title to the street. Attempts to gain full title to the street, which may never have physically existed, were abandoned September 1967.

1971 Rev. Naegele was installed as pastor on January 3.

1973 A new roof was placed on the Church building.

1974 The interior of the church was renovated during the summer and early fall. Member Richard Foose was the designer. The overflow room (originally the Sunday School room) was incorporated into the church sanctuary, by removing the folding doors and partitions. These renovations were dedicated Nov 24. During the renovations, services were held in Spangler Hall.

1978 The Baltimore County Dept. of Aging started sponsoring a Senior Citizens Center in Spangler Hall. Meals on Wheels began using the kitchen of Spangler Hall in Dec. A 125th Anniversary celebration of the Congregation began Oct 1.

1979 A Homecoming Sunday was held on June 4. The 125th Anniversary celebration concluded with a banquet Sept 22. The Spangler Hall Mortgage was burned Feb 11.

1981 A ramp for those with disabilities was dedicated on May 3.

1983 A new ceiling replaced the old one in Spangler Hall.

1986 A new roof was placed on Spangler Hall. The church was repainted.

1989 Air conditioning was installed in the church building. Meals on Wheels ended use of the Spangler Hall kitchen when they starting using a centralized kitchen in the area.

1992 Rev Mark A. G. Huffman became pastor November 29. A new roof was placed on the church in Dec.

1993 Rev Huffman was installed as pastor Jan 10. The overflow area of the church sanctuary was redesigned.

1994 Stained Glass windows replaced the clear glass windows in the overflow area of the church. They were dedicated Dec 11.

1995 A new roof was placed on the Parish Hall. A restoration of the Stained Glass windows in the church sanctuary began.

1998 The Senior Citizens Center moved to a larger facility built nearby.

1999 A Contemporary service started in Spangler Hall Jan 24. Since the flat roof of Spangler Hall was prone to leaks, a pitched roof was placed on it. It was completed in May. A 100th Anniversary celebration of the current church building was held May 23.

2002 The restoration of the Stained Glass windows was completed except for the onion shaped windows.

2003 A 150th Anniversary celebration of the congregation was held Sept 14.

2006 The Stained Glass windows on the west side of the Martin Luther panel and those over the Good Shepherd Panel were restored by May 1. Rev. Mark A. Bringman became Associate Pastor September 17.

2007 Groundbreaking for the Connector and the addition to the Parish Hall was held April 22. Parish Hall will be renovated. The restored Stained Glass windows were dedicated Dec 2.

2008 The renovation of the Parish Hall was dedicated on April 13 and a celebration was held April 27. Rev. Huffman went on a sabbatical to Germany from April to July.

2010 The Connector a.k.a. The Breezeway and the addition to and the renovation of the Parish Hall were dedicated August 1. Also dedicated were various Named Rooms and paving bricks.

2014 The interior of the church was renovated July.

2016 Rev. Kay became Rev Dr. Kay after receiving a Doctor in Ministry in May.